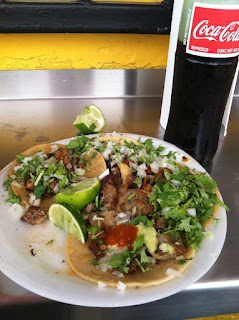 Not much to say about the restaurant that is Tacos La Banqueta (formerly “El Güero”) in East Dallas. The menu, however, is a different story.

The taco shack is just that, a locale not much larger than your average storage unit. It seats maybe six customers in 50s-style cafeteria stools inside and there’s hardly any space left over for additional customers to come in and order. Outside there is a table, and if you’re lucky, three chairs. But watch your back, it’s in the parking lot.

I posted the picture above in Facebook and a friend asked where I would rate them on a scale from 1 to 10. Nine, I responded. Seven if someone brought them to the office and I missed out on the experience.

The offerings are your standard Mexican fare: Bistec, Al Pastor, Lengua, Chorizos, Tripa, Cabeza, Suadero and, as of recent, “Chicken.” If you’re new to street tacos, stick to Bistec (steak) and Al Pastor (pork). If you’ve walked joints like this before, don’t miss out on the Tripa (small intestine) and Suadero (Google it) delights. Down it all down with a Mexican Coca-Cola.

The default wraps are corn, although flour tortillas are available for an additional fee.

Tortas (sandwiches) and alambres (shish-kabobs) are also served, but I haven’t tried them yet. 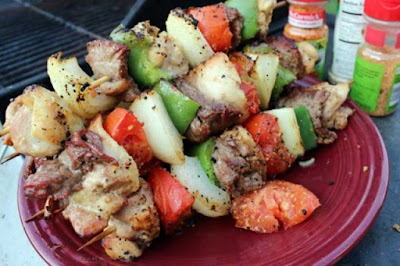 Chicken and beef skirt kabobs, or dinner+leftovers as we like to call them at home.

I’m not much of a cook, and the few things that I venture to try to prepare on my own I grill.

For the price of a single outing to a restaurant, a trip to the grocery store provides up to six meals that can help us save some dough… to maybe go out for dinner this weekend?

Saving money by cooking at home is certainly no innovation, but it seems that every time I do, I scratch my head and ask myself, “why aren’t we doing this more often?”